F. Bunshah Award and Honorary ICMCTF lectureship is intended to recognize outstanding research or technological innovation in the areas of interest to the Advanced Surface Engineering Division (ASED) of the AVS, with emphasis in the fields of surface engineering, thin films, and related topics. 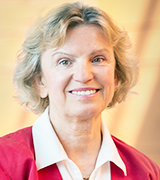 Jolanta E. Klemberg-Sapieha obtained her Master’s and PhD degrees in Chemistry and Materials Engineering from the Lodz University of Technology, Poland. She joined Polytechnique Montréal more than 40 years ago, where she is now Professor, Director of the Laboratory for Optical and Tribo-mechanical Metrology (LOTM), Codirector of the Functional Coating and Surface Engineering Laboratory, and Principal Collaborator of the Multisectorial Industrial Research Chair in Coatings and Surface Engineering within the Department of Engineering Physics. The main research interests of J.E. Klemberg-Sapieha are the science and technology of thin films, surfaces, interfaces, and coating systems. She has particularly contributed to the field of hard and super hard protective coatings, tribological coatings, mechanical and tribo-corrosion properties of materials, coatings on plastics, and surface and interface analysis for aerospace, manufacturing, bio-medical, optical, automotive, and other applications. A significant part of her research has been performed in partnership between university and industry, the latter one including major international aerospace and aircraft-building companies in North America, in Europe, and in Asia. Her research resulted in more than 350 publications and 15 patents. www.polymtl.ca/larfis

Over the past several decades, we have witnessed significant advances in numerous scientific and technological sectors thanks to the development of new thin-film and coating systems and surface engineering approaches, frequently based on the use of plasma processes. In many cases, the ever-increasing requirements involve an “ideal” combination of the mechanical, tribological, corrosion, thermal, and other characteristics, as well as high durability that can only be satisfied by using specifically tailored film architectures including nanocomposite, nanolaminate, multilayer, and graded layer systems. Such progress has been possible based on an in-depth understanding of the evolution of the microstructure during the film growth, of the intimate relationship between the microstructure on the atomistic and nanometer scales and the macroscopic properties, and the physical and chemical effects involved in plasma-surface interactions.

This presentation will highlight a journey of the development of plasma processes and functional and multifunctional coatings in our laboratory, involving numerous students and collaborators, that has been motivated by curiosity, by real-life/practical applications, coating systems performance and durability, and the prospects for sustainable future. In particular, I will illustrate my contributions to the field of surface engineering by taking examples from four main periods of activity, namely (i) high-frequency plasma for surface activation and plasma polymerization, (ii) functional coatings on plastics with a tailored optical, barrier, and anti-scratch characteristics and resistance to the outer space environment, (iii) hard and elastic, wear-resistant nanocomposite protective coatings for manufacturing applications, and (iv) protective coatings for harsh environments providing high resistance to solid particle erosion, ice accumulation and high-temperature oxidation suitable for aerospace applications.