Christopher A. Schuh, Department of Materials Science and Engineering, MIT 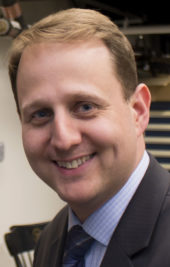 Many surface treatment processes involve impact events, including abrasive spray, peening methods, or spray coatings. The fundamental physics behind such processes, including deformation, bonding, and coating development, however, remain mysterious; the impacts are extremely fast and involve microscopic particles, so that they are challenging to resolve. This talk will review a new line of research aimed at understanding the unit process of particle impacts at velocities into the supersonic range—we study individual ~5-50 µm particles and record their approach and impact with a substrate using an all-optical single-particle test method with nanosecond time resolution. For hard particles, this method leads to quantitative measures of plasticity at extreme rates (>107 s-1). For metallic particles, it quantitatively reveals the changes in plasticity that occur as particles approach the threshold velocity for bonding, as well as other deleterious transitions such as impact-induced melting and erosion. When combined with post-mortem characterization, details on microstructural evolution in extreme conditions can be discerned, including, e.g., dynamic recrystallization by a new mechanism that emerges at high rates, or the fracture and delamination of nanoscopic surface oxide layers.

Christopher A. Schuh is the Danae and Vasilis Salapatas Professor of Metallurgy in the Department of Materials Science and Engineering at MIT.

He earned his B.S. from the University of Illinois at Urbana-Champaign in 1997, and his Ph.D. from Northwestern University in 2001 in the same field, and held the Ernest O. Lawrence postdoctoral fellowship at Lawrence Livermore National Laboratory 2001-2002 prior to joining the MIT faculty in 2002. Prof. Schuh’s research is focused on structural metallurgy and seeks to control disorder in metallic microstructures for the purpose of optimizing mechanical properties. Prof. Schuh has published more than 250 papers and dozens of patents, and has co-founded a number of metallurgical companies. These include Xtalic Corporation, which commercialized nanocrystalline alloy coatings in wide and growing usage around the globe in electronics applications, and Desktop Metal, a metal additive manufacturing company.

In 2011 Prof. Schuh was appointed Head of the Department of Materials Science and Engineering at MIT, a position he filled until the end of 2019. Over that time he significantly expanded the department’s faculty and space profile, and launched and grew the top online education effort in materials science. He currently serves as the Coordinating Editor of the Acta Materialia family of journals. Among his various awards and honors are his appointment as a MacVicar Fellow of MIT, acknowledging his contributions to engineering education, and his election as fellow of the National Academy of Inventors and a member of the National Academy of Engineering.